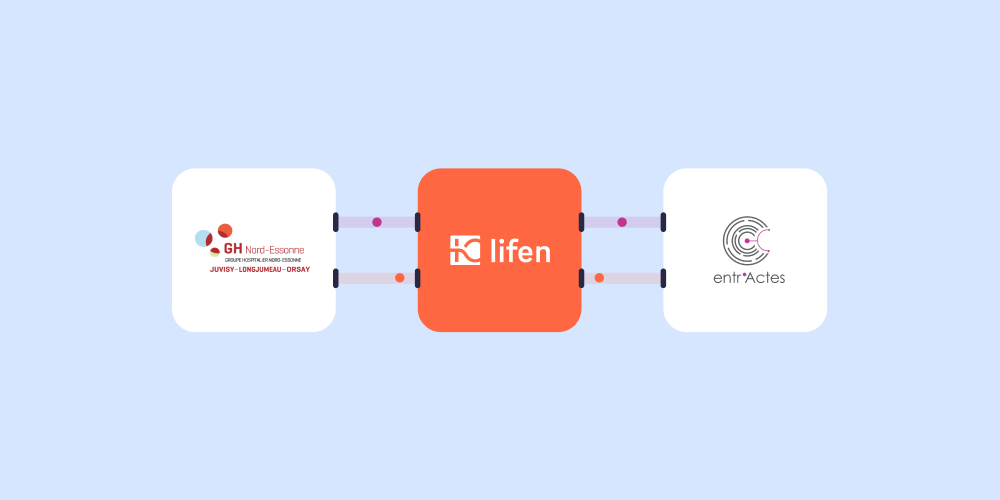 Lifen takes coordinated care integration to the next level

Entr’Actes, an app that helps hospitals and independent practitioners coordinate their care offers, called on Lifen’ interoperability expertise to enhance its usage in one of France’s largest hospital groups.

Entr'Actes is a digital service for primary care coordination that optimises the patient journey inside and outside the hospital. Via a mobile app and web platform, healthcare establishments can check independent practitioner availability in a given area, then share all the necessary data with them, effectively optimising the care pathway thanks to the inbuilt quick referral system. Independent practitioners can also use Entr’Actes to communicate with hospital services before referring a patient, avoiding impromptu (and often unnecessary) trips to the ER, thus improving coordination between both ends of the care spectrum.

The Nord-Essonne Hospital, one of France’s largest hospital groups, with nine sites across the vast Essonne administrative division, just south of Paris, needed a solution to ensure the efficiency of its shift toward ambulatory care in the context of a large influx of ER admissions. This is an issue that only grew in scale during the novel coronavirus pandemic. Entr’Actes, designed by healthcare professionals for their peers with a patient-centred approach, ticked all the boxes.

The Entr’Actes services had been a part of the Nord-Essonne Hospital’s ecosystem since 2019, and registered a steep increase in active users during the peak of the pandemic. Optimal care coordination between the Hospital and independent community practitioners had to be achieved to avoid unnecessary trips to or prolonged stays in an already overloaded ER. Entr’Actes, a service that facilitates and promotes outpatient care, quickly became a vital asset.

With Entr'Actes joining the facility's ecosystem, it was essential that the patient identification process be streamlined to ensure the continuity of care and avoid any loss of capital information. Indeed, every time a practitioner communicated with a peer via the Entr’Actes platform, they were required to enter the corresponding patient’s basic information (name, sex, birth date, family doctor). Before Lifen’s interoperability helped uncomplicate this process, practitioners had to manually fill in this information by copying it from the Hospital’s record system.

The future is here, except sometimes it only makes things harder

Nord-Essonne Hospital staff now had access to an invaluable asset, but an extra administrative task had been added to their plate. This is something that frequently happens with third-party applications in the hospital ecosystem: they often work in a silo, and despite the benefits they bring to the table, their usage comes with the burden of an extra set of tasks.

Without the assistance of an interoperability expert, third-party app integration can be described as throwing spaghetti at the wall and seeing what sticks. Without a platform to streamline and maintain the connector set, the result is a lack of data safety that only grows more concerning as regulations evolve and become virtually impossible to keep up with, along with a jumble of information strewn across an archipelago of archives, platforms and terminals. The Nord-Essonne Hospital was experiencing this first-hand, with more and more practitioners refraining from making good use of the growing number of e-health solutions within their reach simply because they lacked time to go through the administrative motions.

The stepping stone to interoperability in full swing

Lifen’s interoperability services are all about connectors. Once they are properly established, they achieve a double goal. The first data flow streams from the facility’s Patient Administration System to the app: data is pulled from the former and processed by latter, ensuring that patients are correctly identified. A posteriori, when the app has done its job, any data generated by it is then ingested in a second stream into the facility’s EHR.

Since Lifen was already in charge of the Nord-Essonne Hospital Group’s secure sending and EHR-integration functionalities, connectors were already set up that allowed the PAS and EHR systems to communicate, on top of making it easy for any new document to be automatically sent to the desired location.

Once Lifen built the last mile, or, in other words, the road stretch between Entr’Actes and the already existing connectors within the Nord-Essonne Hospital, it was as if the puzzle pieces fell into place. With Entr’Actes working in tandem with the Group’s EHR and PAS systems, whatever information generated by the former was now automatically integrated. And likewise, whatever data Entr’Actes needed to have access to in order to link existing patients to its own accounts was now easy to fetch. No human intervention needed.

And that’s not all: since now all integrations are managed by Lifen’s experts, abiding by strict SLAs and making the best of cutting-edge monitoring capabilities, service disruptions and other update-related issues can be considered a thing of the past.

Since Entr’Actes is now a tried-and-tested go-to solution for the Nord-Essonne Hospital’s first-response and labour & delivery staff, it is only logical to assume that the next step will be to deploy it to other departments as needed, which should take less than a few hours.

As for Entr’Actes, now a part of the Lifen app marketplace, its integration to other healthcare establishments in Europe is more than three times faster thanks to FHIR APIs that allow for the establishment of seamless PAS and EHR communication fluxes.

“Before Lifen came into the picture, using Entr’Actes meant that practitioners had to type in patient data manually every time they wanted to use the app, which discouraged them from using it altogether. Now that this has been fixed, precious time was gained, as another fastidious administrative task was eliminated.”

“Thanks to Lifen, deploying Entr’Actes in whatever Nord-Essonne Group establishment or department is now a straightforward process. And at an even wider scale, any healthcare establishment that already uses Lifen can now easily have our app integrated into their ecosystem and workflows.”