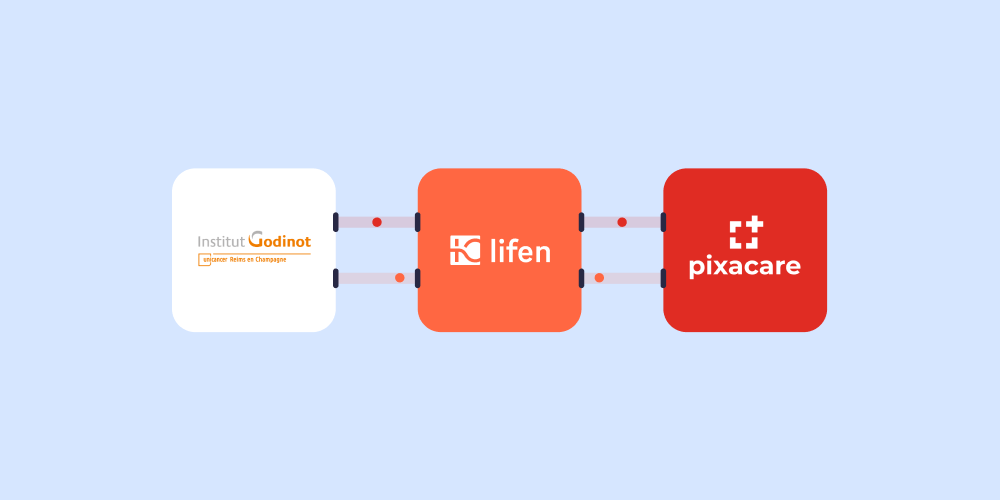 Lifen’s expertise in interoperability helps both digital health applications and healthcare facilities. Learn how Lifen assisted Pixacare with their deployment in the Godinot Institute by dompting the interoperability Kraken that stood between the two.

Pixacare and the interoperability challenge

A tele-expertise app, Pixacare aspires to transform simple, ubiquitous smartphone cameras into powerful health monitoring devices. All it takes is a quick snapshot of the affected area, and Artificial Intelligence does the rest: it detects the size and extent of a skin affliction, analyses its colour, detects the stage of healing and generates a preliminary report.

Before being integrated into the Lifen platform, Pixacare’s service was not interoperable. Practitioners had to take a picture of a patient’s hospital wristband barcode in order to extract the corresponding clinical information. The data obtained was not automatically matched to the individual’s Patient Administration System ID - and this match happens to be essential if one wished to ingest third-party app data into an EHR.

Solving the puzzle vs. having it solved

Had Pixacare chosen to tackle the Godinot interoperability challenge directly, they would have had to spend a considerable amount of time and money to ensure their software was compatible with the hospital's information systems.

Furthermore, each individual deployment would have been made-to-measure, and would not be replicable across other healthcare facilities.

Once built, the connectors would have to be frequently updated as institutional requirements evolve.What this means, in real-world terms, is that on top of the cost and hassle of a six-month deployment process, Pixacare would have to invest significant resources and energy in dealing with constant regulatory updates and systemic maintenance, among other technical aspects that transcend its core expertise and raison d’être.

For Lifen, putting it all together is second nature

Thanks to its leading expertise in interoperability, Lifen worked behind the scenes to establish the necessary connectors to allow the Pixacare app to interrogate the Institute’s Patient Administration System.

This means Pixacare users are automatically identified by their preexisting Godinot Institute patient ID.Solving the interoperability puzzle meant Lifen had to find a way to make the two parties able to talk to each other, automatically and in real-time. In order to do this, a specific HL7 Admit-Discharge-Tranfer-type connector was set up, allowing Pixacare to interact with the aforementioned PAS via a FHIR-standard Application Programming Interface (API).

Since this is a fairly straightforward process with the right interoperability tool suite, Pixacare was able to be integrated into the Godinot Institute’s Information System in only two weeks!

- Patient identity-monitoring was made easy: no more typing errors or other blunders that could lead to duplicate patient records

- Ensured security compliance: since a single platform is used to manage all third-party applications connected to the Institute's PAS, and knowing that all regulatory updates and compliance requirements are handled directly by Lifen, data safety concerns are no longer an extra concern on Godinot’s IT team’s plate

- Pixacare patient accounts are automatically completed with all relevant information, as entered in the corresponding Godinot record: names, surnames, birthdates, and patient ID number - all the app has to do in order to obtain this is interrogate the FHIR API mentioned above, requesting an information import

“Lifen was our go-to partner to tackle the deployment of Pixacare at the Godinot Institute. In less than a month, all three teams worked together on the platform’s go-live with the establishment’s own interface. Now practitioners can easily find their patients through our applications, and work together to deliver optimal care.”